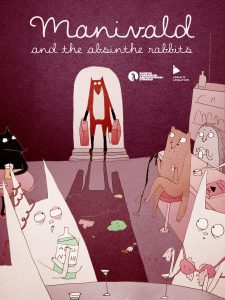 Manivald, a deeply troubled fox, becomes a life coach in a small town full of queer misfits and drunk rabbits.

The series focuses on Manivald, a socially awkward fox who moves into an undercover gay bar. The main story arc follows the story between Manivald and his ex-nanny Ingeborg but also includes little stories from episode to episode where we introduce other queer animals from this universe who just like Manivald suffer from identity crisis.